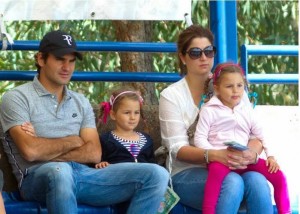 The family of Roger Federer will expand in 2014 with the birth of a third child. The announcement was made by the former World No. 1 Tuesday.

“Mirka and I are very pleased to announce that Myla and Charlene will be big sisters in 2014. Happy holidays,” can be read on his Twitter account.

At 32, Roger Federer became a father in 2009 with the birth of twins. He is the winner of 17 Grand Slam tournaments.

Mirka and I are very happy to share the news that Myla & Charlene will be big sisters in 2014! Happy Holidays…..