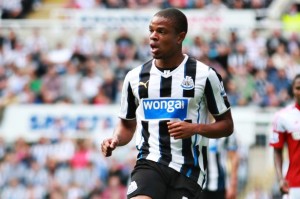 Loïc Rémy, silent for five matches, is perfectly recovered by striking Thursday twice in the Boxing Day against Stoke (5-1). The French striker is the man of the moment in Newcastle. The French international will attempt to reassure against Arsenal on Sunday in a match counting for the 19th day of the Premier League.

The Magpies are still present at the top of the table because with their 33 points they make up only six points behind the leader and opponent of the evening, Arsenal. Newcastle count on the former Marseille to make a difference against the Gunners.

Currently on loan for one season at Newcastle from Queens Park Rangers, Remy is on the rise since the beginning of the season. The Martinican arouses the lust of several clubs like Arsenal .

The London club has referred to the man who could hurt them tonight on the lawn of St. James Park. Indeed, according to CaughtOffside , the French striker would not stay in the Magpies and could join Arsenal. Arsène Wenger loves his profile and his leaders would be willing to offer £ 12 million to QPR (€ 14.5 million) to buy his three-year contract. And according to the same source, the London club’ s proposal would have chanced upon the approval QPR leaders relegated last season to Championship (English D2).