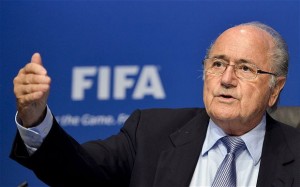 Sepp Blatter is worried about the 2014 World Cup. The Fifa president criticized the organizing committee. According to him, they have not realized soon enough the efforts required to host the World Cup.

For Sepp Blatter , Brazil had so long enough time to prepare everything on time. The FIFA president in the columns of the Swiss newspaper 24 heures was back on the organization of the 2014 World Cup. And he did not mince words. “Brazil has become aware of what it is. They started much too late. It is the latest country since I ‘m at Fifa and yet it is the only one who had so long – seven years – to get prepared “ , said the Swiss leader. It must be said that the shipyards in Brazil have been subject to many strikes, unions enjoying the exposure provided by the World Cup to request new social achievements.

An impact on the competition?

On the issue, Blatter displays an optimism which commands admiration. “I ‘m an optimist, not a coward. So I’m not afraid. But we know there will be new events, protests, said the chairman of the governing body of world football. The latest in the Confederations Cup in the same country, were born on social networks. There was no goal, true claim, but during the World Cup there will be perhaps more concrete, more structured ones. But football will be protected, I think the Brazilians do not directly attack football. As for them, it is a religion.”

The insurance of FIFA president is all the more surprising that it has no factual basis. In June, thousands of people took to the streets of major cities to protest against the poor quality of public services and expenditures in the construction of stadiums. The protesters should not miss the opportunity to have the world’s cameras casted on their country to share their discontent.