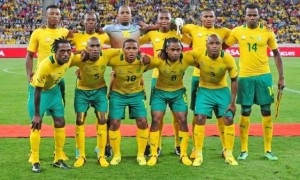 South Africa have launched the African Nations Championship they are hosting from January 11 to February 1, 2014. Bafana Bafana dominated Mozambique in the opening game (3-1).

Yet South Africans have started poorly the meeting by conceding an early goal in the 11th minute by Diogo. Gordon Igesund’s men have taken twenty minutes to grease the machine before equalizing through penalty. The opportunity was transformed by Bernard Parker. It is on this score of 1-1 that the two teams went to the locker room.

Tchabalala and his teammates started the second half as they had finished the first. Quickly they materialize their domination by taking advantage following a powerful shot from Kekana (58th minute).

The host country has completely folded the match after a second goal by Bernard Parker ( 81st ) that left-footed a shot from Tchabalala.
Bafana Bafana have completed accomplished their first mission in Group A by winning their first game in the attendance of their President Jacob Zuma.