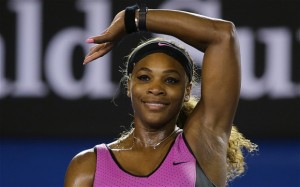 Serena Williams spent a little more time on the court for her second clash at the Australian Open. But like her speedy first-round match, the American conceded just three games to the Serbian Vesna Dolonc, 6/1, 6/2 after 1 hour 02 minutes.

In the third round, the World No. 1 will face Slovakia’s Daniela Hantuchova who fell to 33rd WTA.

Samantha Stosur who could cross the path of the youngest of the Williams sisters in the knockouts, also defeat in two sets Tsvetana Pironkova, 6/2, 6/0. But to get to that stage of the competition (knockout stage), the Australian must first breakthrough the obstacle of Ana Ivanovic.

The Serbian has qualified for the third round after winning 6/1, 6/2 at the expense of German Annika Beck.