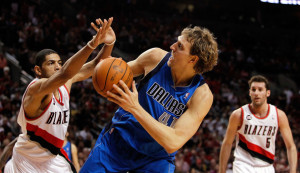 Lebron James (34 points) allows the Miami Heat to defeat the Charlotte Bobcats after extra time. The interior of the Cats, Bismack Biyombo made a copy of blackened 7 points, 3 rebounds. Nicolas Batum and the Trail Blazers regained power in the West. The East is still under the domination of the Pacers. Paul George with 36 units, dominated Indiana LA Clippers. Ian Mahinmi took 2 rebounds in 19 minutes of play. Frank Vogel and his men have not still lost against any franchise in the Western Conference at home (6 victories; 0 defeat ) . Joakim Noah led the Bulls to a success at the expense of the Sixers.

After a victory over the Spurs on the eve, Blazers chained up in Dallas, 111-127. Nicolas Batum scored 15 of 21 points in the first quarter time to allow his franchise to take the right end of the game (23-35). LaMarcus Aldridge (30 points) and other members of the five major, all in form kept the pace. The Mavs were overwhelmed and were lurking behind 34 points early in the fourth quarter time (70-104). The last quarter was won by the Texans will not change the outcome of the meeting. Portland won with 16 point of difference making their largest margin of victory in Dallas since March 10, 1993. A victory then gained with 28 points difference – . The franchise of Oregon regained the leading the chair in the Western Conference.

A worrying discretion Luc for Mbah a Moute in Minnesota. Recruited to strengthen the foundation of the Wolves defense, the Cameroonian does not satisfyingly deliver. That night the winger of Wolves made one of the worst provisions of his franchise -1 – in 14 minutes off the bench in third shooting 1 rebound and 1 steal. After three consecutive defeats, Minnesota returned to winning ways while receiving the Utah Jazz , 98-72. Kevin Love (18 pts, 13 rebounds, 5 wt) and Nickola Pekovic (27 pts, 14 rebounds) were the detonators of Wolves. Gorgui Dieng has contributed to the success in 10 minutes with 4 points (2/2 from midway), 4 rebounds, 1 con, but also lost 4 balls.

Despite the 31 units and 17 rebounds by Anthony Davis, the best scorer of the game, New Orleans is still in the drive. Al Farouq Aminu’s teammates (12 points, 9 rebounds) recorded their eighth straight loss. The Pelicans were beaten by the Golden State Warriors, 87-9. Led by a point at the break (54-53), the Warriors in the dynamics of the second quarter time (25-28) , took control of the second period. Spurred by Stephen Curry (28 pts, 8 pds, 6 rebounds) – luxury bencher-, Golden State stopped their losing streak to 2. Andre Iguodala in the five major of Warriors scored 8 pts.

The other results of the night