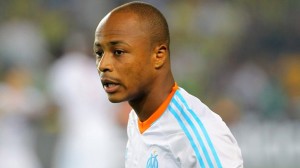 André Ayew still has a few weeks to go away from fields. He will watch afar the game between club and OGCN tonight. But until he definitively comes back from injury, the Ghana midfielder expresses himself on some hot topics related to the OM and himself.

Interviewed Monday night on Canal + Sport at the show J +1 about Elie Baup, his former coach , Andre almost regretted the departure of a rigorous technician. ” Elie Baup too nice with the players? This is a rumor that is false. We forget that we were second with him after a complicated season. The Champions League has made us more harm than good this year. Other clubs as Monaco or Paris would have struggled too. At the level of the game, we produced a lot but we lacked experience. Regarding the dressing room, it was always welded . The departure of the coach, it is a decision of the President, not ours. “

The Ghanaian also gave his opinion on the replacement of Baup . For him, José Anigo is everything except a bad coach. “José, he says, I know him very well. I think he really has the skills to lead Olympique de Marseille. If he needs me, I’ll be there. But I especially want to be on the ground. In the 4-4-2, I can play several positions behind the two strikers, left or right. This is not a problem for me.”