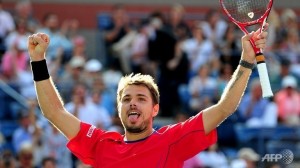 “It’s incredible! I’m so happy to be here, right now, to win this game and be qualified for a Grand Slam final for the first time in my career. I work every day to try to win these games, to try to play a Grand Slam final. And tonight it has come true and I ‘m really happy,”said Wawrinka who will try to extend his happiness in Sunday’s final.

Executioner of triple defending champion Novak Djokovic in the previous round, the World No. 8 will cross the racket with his compatriot Roger Ferder or Spaniard Rafael Nadal. The top two ATP rivals will compete this Friday for the 11th time in a Grand Slam.