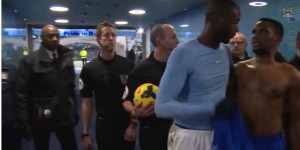 Do not be fooled! The two African stars did not come to blows. Far from it, despite the defeat of Manchester city against Chelsea (0-1) in Premier League Monday, the link between the two men is always tied. The scene takes place during halftime between Citizens and Blues.

Eto’o who had just given his jersey to Yaya expected that of the Ivorian. The latter delays in make his gesture. A joking attitude that arguably seemed to infuriate the Indomitable Lion. The exchange is funny and friendly: Eto’o: “Give me your shirt little brother!” Yaya: “I say I’ll not give you!” Eto’o: “I’ll slap you eh, you think you are tall and so…? “ they all burst into laughter.

At the end of the exchange, while Yaya Toure showed him the damage caused by his tackle in the first half, Eto’o is happy with the career of the Ivory Coast: “I am very proud of you! I swear bro!!

See the scene in the video here!