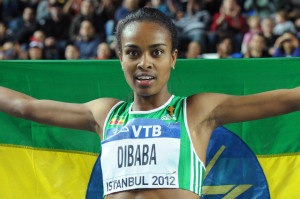 It’s not necessarily the one we were waiting there. But in Ethiopia, a Dibaba can hide another. This is Genzebe, the sister of Tirunesh, multiple Olympic gold medalist and record holder in the 5000m, who makes headlines. She set a new world record in the 1,500 room by winning 3 min 55 sec 17 last Saturday in Karlsruhe, Germany.

Genzebe lowered more than 3 seconds the previous record on the distance belonging to Russian Elena Soboleva since February 18, 2006 in Moscow. The latter had established a time of 3min 58s 28 c.