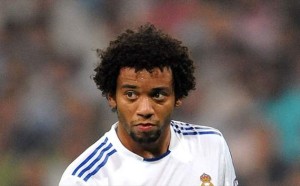 Football probably will never stop racism. The latest proof is this slippage of fans of Atletico Madrid in the semi-final of the Spanish Cup which saw Real Madrid win over their rivals in the Capital (3-0).

While waiting to leave the Santiago Bernabeu stadium, supporters of Atletico have indeed attacked Marcelo, according to Marca. The latter, who had not been used during the game, was doing some physical exercises on the ground with some of his teammates when Colchoneros fans sang a song in which we hear: “Marcelo is a monkey.”

And as if that were not enough, when the Brazilian winger was joined by his son on the lawn, they sang another song that told the child: “It’s not your father”…