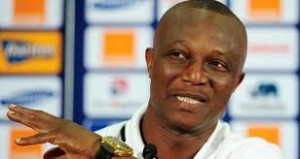 According to information released by our colleague from Ghanasoccernet.com, Ghana head coach Kwesi Appiah has already penciled 18 to 20 players who according to him are supposed to certainly make his squad to Brazil unless any of them is bothered by injury till the World’s mass gathering.

“I have been saying this from day one that it is only when you are clubless that you will miss my team because I cannot justify why I must call a player who is inactive at club level into my World Cup squad,” he told Asempa FM

“As a coach there is no way you can say you don’t have a rough idea of the players you need at a tournament with just some few months to go.

“There are some players that I have reduced my scope and concentrating on them for the World cup and the only thing I am praying against is that they don’t get injuries or something of that sort.

“Saying that I can confidently say I have 18-20 of the players who will automatically make my squad to Brazil barring any injury.”

The Black Stars will play high-profile international friendlies against Costa Rica, Honduras and Holland in preparations for the tournament.

Ghana has been paired in group G where they will square off against old foes USA and Germany as well as Portugal.