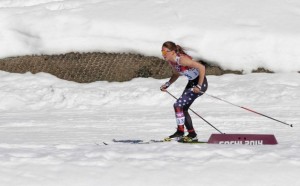 It’s pretty hot in Sochi which hosts since Feb. 7 the Winter Olympics. But it feels like spring. The International Olympic Committee remains serene anyway.

Sochi Olympics are taking place despite spring temperatures in Sochi. Temperatures remain above normal: in Sochi, the thermometer reached 16 ° C at the Olympic Park, the temperature increased to 14 ° C around the tracks of Rosa Khutor. For the first time Thursday, the organizers decided to change the program of events: the kickoff of the super-combined gentlemen, originally scheduled at 11 am Friday, was advanced to local 10am (7am Switzerland) to “minimize the effects of weather on the competition.”

But according to the spokesman of the IOC, it is out of question to get alarmed. “For the moment – but it’s an ongoing battle regarding winter sports – we are calm, but we look at the evolution of the situation. There is plenty of snow on the sites, it snowed a lot during the Christmas season, it is hard snow, I do not think there will be a problem.” said Mark Adams, during his daily press briefing.

At the side of the organizing committee, the speech is the same. Spokeswoman, Alexandra Kosterina recalls for several days“the existence of a backup plan.” “We have a comprehensive plan, but we have not used the snow stored since the beginning of the Games,” she said.

It’s so hot during the country skiing (10 km classic) that some competitors compete in short sleeves as can be seen by the American Sophie Caldwell, with a combination completely sleeveless.