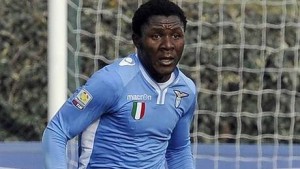 Many have suspected that Joseph Minala exceeds displayed age on documents. The nimbus that hides this reality seems increasingly dissipated. Cameroonian nugget would have had an unhappy childhood, his agent dixit.

“He had a difficult childhood. The situation is clear. If you talk with him, you realize he really is 17. I cannot deny that he looks older, but all documents are good,” said Diego Tavaro the Gazzetta dello Sport.

Some blogs and sites believed to know a little more about the actual age of the Cameroon-born player. They even pretended to be the player in an interview and even gave his age which is 42 years. The player denies.

“These are false statements that were attributed to me by people I do not know ,” he reacted. His club, Lazio, also responded via a statement.

“Following Articles published in the press on the age and the marital status of footballer Joseph Minala, we uphold the absolute legitimacy of the documentation filed with the federal bodies. In compliance with the football supporters and the club reserves the right to act vis- à-vis officials” can be read in this note released by the Italian club.