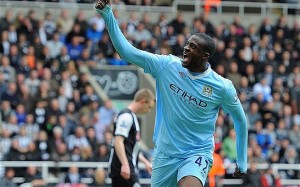 This is the poster of the early knockout stages of the European Champions League – see the whole program. Manchester City is hosting FC Barcelona tonight (Tuesday) in England. A meeting with the scent of the final of the competition where despite the star-studded Catalan, a man will be showing up.

Barça has won the C1 three times (2006, 2009 and 2011) during the last 8 years, while the trophy is not listed in the track record of Citizens who have also struggled to win on the European continent. So for Manchester City, triumphing in this double tie would have a significant impact.

Triple African reigning Ballon d’Or, Ivorian Yaya Touré is highly anticipated tonight. And because he wore during 3 seasons the colors of FC Barcelona where he won a Champions League in 2009. His impact on the world of football in recent years makes him one of the best players on the planet. If he has since his arrival at the Etihad, hadb the opportunity to propel forward and score goals, Touré, however, must be careful while facing Barça, a master of possession with geniuses in the midfield like Xavi and Iniesta.

FC Barcelona are not as impressive as in the Guardiola era but still handle an efficiency as evidenced by their 6-0 win the past weekend against Rayo Vallecano in La Liga. The former Monaco also get suspicious: “this is a poisoned gift. It will be difficult to play against my former teammates. But I am mentally strong so it’s going to be alright. Anyway I did not want to play Barca at this stage.”

Failing to shine in the game, Yaya will have the opportunity to admire his new palette: the free kicks.
Appointment, 19:45 GMT to follow on our social networks Facebook and Twitter.