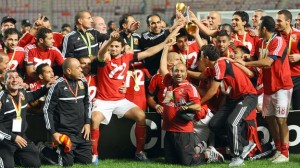 Another trophy for Al Ahly. After their 8th title of African champions last November, the Egyptian champion club has won the Super Cup Africa 2013 in Cairo Thursday against Sfaxien 3-2. So a new double for the most successful club on the continent.

In a boiling Cairo International Stadium, the hosts quickly took the lead through Ahmed Gedo came home after an adventure England at Hull City. This is the score at the break.

Upon recovery, the Red Devils added a second goal by Amr Gamal , in a very lax defense of Sfax. But this goal donation wake Tunisians that reduce the score for the first time from the penalty spot thanks to Captain Ali Maaloul.

Hope of short duration. Amr Gamal puts his team in front with his second goal of the night. but Sfax had not let go so quickly. Ben Youssef on a beautiful strike from 25 yards pull a goal back for his side.

Despite their determination, Tunisians will not happen change fate of the game and lose a new African Supercup to Ahly.