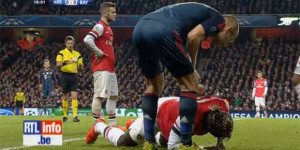 Here are the images that will undoubtedly stir up controversy in the next few hours in Europe and more particularly between Bayern Munich and Arsenal.

If the German victory in the field of the English side (0-2) suffers no protest, a gesture has however caught the attention of many viewers and users and may cause chatter.

Indeed, while Bacary Sagna was down following a threatening contact, the attacking midfielder of Bayern Munich, Arjen Robben, landed on top of him for him to ship a trickle of drool that looks like pretty sputum scraped from the bottom of the gorge.

The Dutch winger appears to have acted willfully against the French international. Unfortunately for him, the images captured by the British television are unequivocal. With these readily available images, UEFA could quickly initiate an investigation. Sanctions against the Dutch? We’ll know in the coming days.