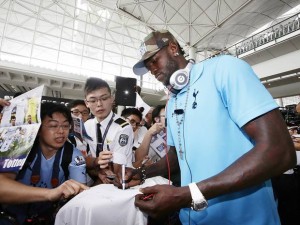 Bad news for fans of Emmanuel Adebayor! The Togolese striker ablaze with Tottenham for two months is not part of the group that will traveled to Ukraine for the knockout round of the Europa League on Thursday against Dnipro. The former Gunner, and other senior players, were put to rest by Tim Sherwood.

“They all have some small bobs. They’ll miss this meeting but we hope they will be ready for Sunday. This is an opportunity for others to shine”, said the Spurs manager on the club website.

Apart from Adebayor, the French Younes Kaboul and Hugo Lloris and English Kyle Walker and Aaron Lennon are also absent.

Tottenham faces Norwich Sunday in Premier league to continue the momentum of victory and will need their official scorer (8 goals in his last 11 games).