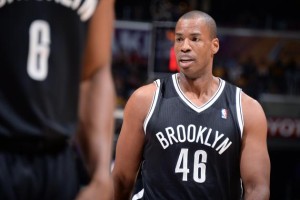 He happened to stand tall courageously as he made his coming out in April. About 10 months after the formalization of his homosexuality, Jason Collins, once again, made a landmark gesture. Last night, during the victorious trip of Nets to Los Angeles, he became the first openly gay player to tread an NBA parquet.

It is 10 minutes 37 seconds that Jason Collins spent on the floor of the Staples Center for his return into action. “I know I can play in the NBA and it’s good to be here,” he said after the meeting. “I feel fit. It was fun to find a floor, to set screens, make fouls.”After a year off, the 35-year pivot took 2 rebounds and 1 steal ball. A little rusty, he committed five errors and lost two balls. “I ‘m focused on the game plan, I must learn the systems, pursuing the player who wants more than historical return have a real impact in the game I cannot think about the historical side now. I focus on my job. “

This return to the world of professionalism after his coming out could decomplexe many, says the Lakers superstar Kobe Bryant. “His impact is far greater than what people think. You can actually see him as the first openly gay player but we also understand the domino effect that he will create beyond the world of sport.”Says basketusa . Jason Collins has made its entry in the ovation from the Staples Center. He signed a 10-day contract with the Nets in Brooklyn.

Video of his entry