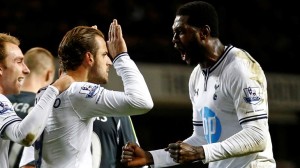 When he does not score important goals as he scored twice last Thursday in the second leg of the Europa League against Dnipro, Emmanuel Adebayor knows how to make his partners shine. The Togolese striker is no stranger to the precious 1-0 win of Tottenham on Sunday over Cardiff.

Against a side in red zone and in quest of points, the Spurs have suffered. Aligned together for the second consecutive time in four days, Adebayor and Soldado combined to open the scoring in the 28th minute of play.

The Togolese also request the public to applaud the Spaniard in trouble in recent weeks who has just scored his first goal in 2014.

Tottenham who will have a complicated month of March have confirmed their 5th place.

Adebayor with the wonderful assists