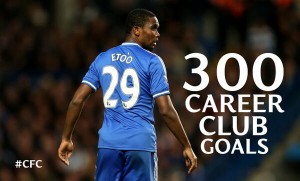 This is the image of the weekend. Samuel Eto’o that imitates the gait of an old man after scoring against Tottenham in Saturday’s London derby (4-0) does not stop throwing responses to a controversial sentence of his coach Jose Mourinho a few weeks ago: “We do not have a scorer. Eto’o? Yes but he is 32 years old, maybe 35 , I do not know “.

A few days later, a former girlfriend of the Cameroonian claimed Eto’o was actually 39 years. If the former Bracelona did not want to argue on these statements, he was able to meet them on the field. “I feel very well. I still take pleasure and this is the most important. In football, there are players older than me, right? What is said is between me and the coach is just between us. I have no problem with either Jose or with others,” he said after the game yesterday.

In opening the scoring against the Spurs, Eto’o who will become 33 years old Monday scored the 300th goal of his club career. He has played for Real Madrid, Real Mallorca, FC Barcelona, Inter Milan and Anzhi Makhachkala.