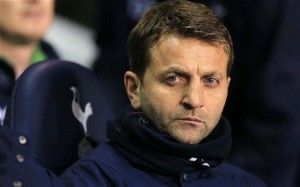 Since the departure of Andre Villas-Boas, the English club Tottenham seems to recover as far the Premier League is concerned. However, even if he restored color to Spurs, Sherwood, who already lives in constant fear of being fired, has no certainty about his situation at White Hart Lane.

Already a rumor about a possible arrival of Sami Hyypia. But truth be told, many indicate that the London leaders already have their own ideas for the future coach who could Louis van Gaal, coach of the Netherlands.

So, the current coach of the Spurs arise many questions. According to the Daily Mirror, the former England midfielder would be suffering from the lack of support of President Daniel Levy, who did not attend last Saturday’s debacle Tottenham on on the field of Chelsea (4-0). “Maybe he was traveling, I do not know, tried to explain Sherwood. It is up to the club to make that decision. One thing is for sure, nobody cares about the team more than me.”