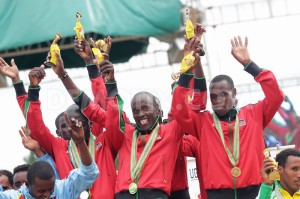 Kenya have once again proved that they remain the masters of endurance races on the continent. Kenyan athletes have dominated without sharing the African Cross Country Championships (in both men and women) Sunday in Kampala ( Uganda). They made a real raid, winning all events both in the junior and the senior. Four individual titles, four class titles, two triplets are the balance posted by the Kenyans.

“We actually made a team effort to make our country proud. The race was especially hard because our opponents are the best in the world. My next goal is the Commonwealth Games in Glasgow,” said Leonard Barsoton on the website of the International Federation.

In the women’s, world junior cross champion 2013, Faith Kipyegon has imposed herself in 25’34 ” ahead of her compatriots Janet Kisa ( 25’42 ”) and Alice Aprot ( 25’47 ”).
In the junior category, Kenyan athletes have also won two individual gold medals with victories of Moses Mukono Letoyie and Agnes Tirop.

With this raid, Kenya, winner of the 2011 and 2012 editions, confirms its overwhelming dominance on the continental cross country.