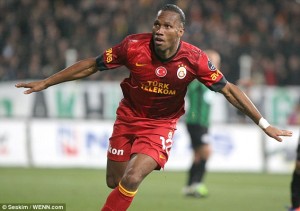 After France, England, China and Turkey (currently), Didier Drogba could also taste the Italian championship. While Totti wants to see him at AS Roma, the Ivorian striker is monitored closely by another Italian club.

Indeed, during the meeting that pitted Chelsea Tuesday night to Galatasaray, Juventus had sent emissaries to observe three players: Oscar, Willian and Drogba.

According to information from Calciomercato, emissaries from Juventus were present in the at Stamford Bridge to watch Oscar and Willian in the Blues side, and Didier Drogba in Galatasaray.

Already tracked by the “Old Lady” last summer, the Ivorian striker will be always closely monitored.