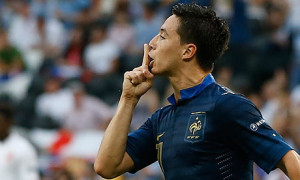 Samir Nasri, so bright with Manchester City will not be in Brazil with the Blues. He has no contact with Didier Deschamps as Catch Brasil.com reports. “I asked to have a discussion with him, but it has not yet taken place”

“You can ask all the players you want, I never had a single problem with a team-mate of France (…) I am more pessimistic than anything else. But if I do not go, it will be because my selection benefits are insufficient, not because of my behavior. In 2010, it was the biggest scandal of the France team and I was not there.”

It would be a shame he misses this appointment!

We remember that he had already made his mea culpa: “After my problems with the press, I refused to talk to everyone; I had a bad press in France. In my head, I was no longer the same. I did not play well, I lost my place, and it was only late in the season that I realized that I was no longer the same. Sometimes when we commit mistakes, we refuse to admit it. And that was my biggest mistake.”