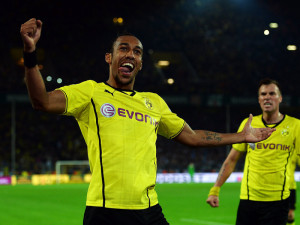 Dazzling against Real a few months ago, Robert Lewandowski will however not be part of the clash at Santiago Bernabeu tonight due to suspension. The big job then returns to Pierre- Emerick Aubameyang who should lead the German attack alongside Marco Reus. A boost of fate for the Gabonese striker, despite his inexperience at this level of competition.

Author of 13 goals in the Bundesliga this season, the former Saint-Etienne center-forward will play his natural qualities and enjoy his speed and spaces in counter-attack to allow BVB to score important away goals.

Though Lewandowski is absent, Carlo Ancelotti is not totally relaxed. At a press conference Tuesday, Merengue coach said he fears the Gabonese Panther.

“Aubameyang, I know him well, he played in the lower categories of AC Milan. He is very dangerous, fast. So the absence of Lewandowski may well be compensated,” he suggested .

Aubameyang hero of Dortmund on Wednesday? The answer tonight from 18:45 GMT at the Santiago Bernabeu Stadium.