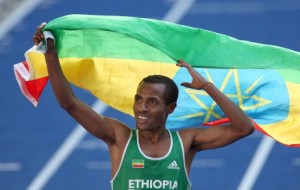 Mission accomplished for Kenenisa Bekele. The Ethiopian realized his dream by finishing on the highest step of the podium of the Paris Marathon. Specialist in the running, the holder of two world records in the 5,000 and 10,000 meters, has aligned this Sunday, April 6 at the 38th Paris Marathon.

For his first 42km195, Kenenisa Bekele (31 years) won with marinara. He first crossed the finish line breaking the record of the event. At 14 km from the end, the triple Olympic champion in 5000 and 10,000 meters took control of the marathon and buckled his race in 2 hours 05 min 02 sec 03 with eight seconds better than the previous record set in 2012 by the Kenyan Stalmey Biwott (2h 05 min 10 sec).

“I had no experience before the marathon today and it was very difficult,” he said. “But I ran the time I was hoping for. “

First thirty to run as fast for his first marathon, Kenenisa Bekele took the lead of the podium ahead of his compatriot Limenih Getachew (2h 06 49 sec ) and the Kenyan Luca Kanda (2:08:01 ).