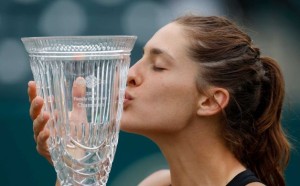 Andrea Petkovic succeeds Serena Williams in the tournament ranking of Charleston. The German, seeded No. 14 was awarded the trophy for the Family Circle Cup at the expense of Jana Cepelova.

Femme fatale of the World No. 1 in the second round of the competition, the Slovak (78th in the WTA) was beaten in straight sets, 7/5, 6/2 after 79 minutes of play.

Winning her third singles title on the WTA Tour, Andrea Petkovic, the 40th in the world rankings before her coronation, climbs 12 rows in the new rankings to be released Monday.