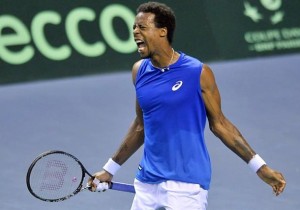 They did it! Led 0-2 after a nightmarish Friday, the tennis Blues qualify for the semi- finals of the Davis Cup at the expense of Germany, 3 points to 2.

Unavailable for the first single, Gael Monfils put aside personal problems to give the victorious point to France in Game 5 of the quarterfinals of the Davis Cup. Faced with Peter Gojowczyk who beat Tsonga Friday, the 25th player in the world has rolled up the meeting in three sets after 1h 52 min: 6/ 1, 7 /6, 5/2.

Shortly before this third point that opens the semifinals doors to the men of Arnaud Clément, Tsonga had restored parity between the two side. The last time the team of France Tennis had succeeded in overturning such disability was in 1996 (note, semi-final against Italy) under the captaincy of Yannick Noah and concluded the campaign by lifting the trophy.

We also note the qualification of Italy who kicked out of the title race Andy Murray and Great Britain, 3-2. The last point of Italy was provided by Andreas Seppi who beat James Ward in the last single, 6/ 4, 6/ 3, 6/ 4.