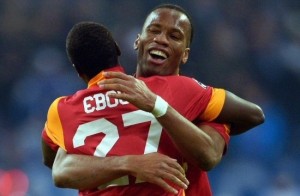 Hot Istanbul derby on Sunday in Turkey between Galatasaray and Fenerbahce. Second in the table, Cibom had to win to hope for a late season with suspense. Mission accomplished with a short 1-0 success in a difficult and very tense match. All happened in a highly charged stadium with fans still noisy.

In this meeting was a myriad of international African. In Galatasaray, Ivorians Drogba and Eboue were starters, while opposite the Senegalese Moussa Sow and Nigerian Emmanuel Emenike  were also tenured. Achille Webo of Cameroon also participated in the battle.

As usual, the game is chopped with fouls. But the only goal of the game comes in the 10th minute by Dutchman Wesley Sneijder.

Nothing will be marked but there will be 16 yellow cards in this game and 2 red cards (1 in each side). On the table, Fenerbahce has 7 points ahead of Galatasaray at 6 days to the end of the season and with a game in hand.
Check out the goal!