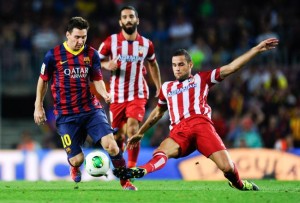 After conceding a draw against Atletico Madrid (1-1) last Tuesday in the quarter- finals first leg of the Champions League, FC Barcelona makes Wednesday a dangerous trip to the field of the other club of the Spanish capital. Required to achieve the feat to qualify, the Catalans do not want to leave anything to chance.

So after visiting Vicente Calderon stadium for the traditional training session on eve of the match, the men of Tata Martino complain to UEFA about the condition of the pitch of their opponent, arguing it does not meet the standards.

According to Marca, the Catalan club suspect their opponent of planning to delay their game forgetting to mow the lawn of the stadium.

The UEFA regulations states that lawns should not exceed three inches and should have the same height across the field. Mowing height should be the same for workouts and games.

The Colchoneros had promised to Barça to restore the pitch before the match.