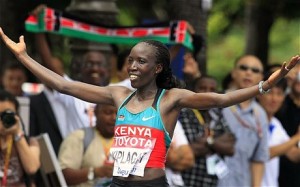 Tirunesh Dibaba could not do anything alongside Kenyans Florence and Edna Kiplagat Sunday in the London Marathon. One of the most prestigious races of the season ended with the success of Edna Kiplagat 2h 20mn 19s. She anticipates her compatriot Florence Kipalagat (2h 20mn 22s).

The Ethiopian Tirunesh Dibaba finished 3rd with a time of 2h 20mn 24s. She missed the race after missing refueling. But not enough to be frustrated. The world champion in 10,000 m was making her debut at a marathon.

At 34 years and 4 children, Edna Kipalagat continues to impose her domination on the marathon. She had already won the gold medal at the World Championships in Moscow last year.