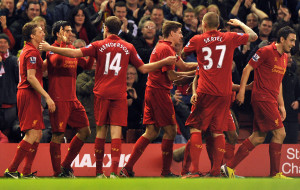 Big performance for Liverpool Sunday in the Premier league. The Mersey Club has won 3-2 in the 33rd League day duel against Manchester City. A meeting which took place in a very mad atmosphere at Anfield.

Everything went very quickly. From the 5th minute of play, Raheem Sterling, full of coolness stunned Joe Hart. Behind, Man City lose their major asset. Ivorian Yaya Toure complained of groin and knee injury on a failed hit and gave way. The penalty is immediate. Skrtel catapult Gerrard’s corner into the net to give his team a 2-0 lead at the break.

After the break, Liverpool guard down and City benefits. David Silva reduced first the score before his pulse, Johnson scores against his camp. This match was far from over. We see opportunities at both sides. 77th minute, Coutinho sees a missed Kompany clearance to shoot Mignolet. Liverpool is no longer to be caught. Reds win 3-2 and keep the Premier League head.

All goals of the match