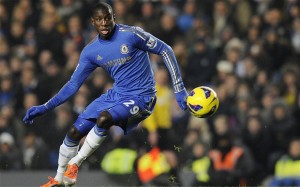 The reward! Demba Ba is reaping the fruits of  his decisive entry into the game last Wednesday against PSG in the Champions League. Author of the winning goal, the Senegalese is still on cloud nine. The opportunity therefore for José Mourinho to trust him of input in a match as he does not often enjoy starting places this season.

Demba Ba starts this Sunday against Swansea and has an obligation to confirm his form. He relegates Samuel Eto’o on the bench.

In opposite, the Ivorian Wilfried Bony also starts, while the Franco-Cameroonian David Ngog starts on the bench.