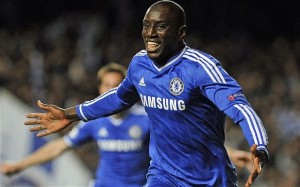 Demba Ba is definitely the man of the moment at Chelsea. Long shelved, the Senegalese striker hinted at great things during these last outputs with his London side. After being the hero of the qualification of Chelsea for the Champions League semifinals at the expense of PSG at the Stamford Bridge, the ex-Newcastle trigger has rehearsed his top form Sunday against Swansea.

Thanks to his 67th minute sole strike of the Premier League fixture, he permits Blues to better position themselves in the race for the league title. A painful success though the hosts, Swansea played shorthanded following the exclusion of Chico Flores in the first period.

Ba tenured to the general surprise at the expense of Eto’o Sunday is then released under the ovation of the London public who made the trip to Wales.

See the goal of Ba