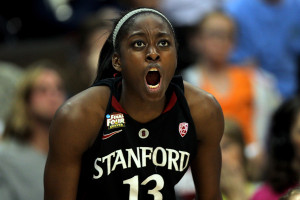 Ahead of the NBA draft in June, the U.S. will live on April 14 the draft pick in the WNBA . And as for boys, the first choice is the curiosity of the WNBA draft. This choice could be on Chiney Ogwumike (22). Announced member of the Top 5 of the draft, the Nigerian-born American winger should be selected by Connecticut Sun, Tulsa Shock, San Antonio Stars , New York Liberty and Indiana Fever.

Sister of the No. 1 draft pick in 2012 Nneka Ogwumike also former player of Stanford, Chiney is making herself the name in the midfield of basketball, winning almost everything in her path. Named Pac -12 Player of the Year in the 2014 season, she is also elected Pac -12 Defensive Player of the Year, espnW First Team All-American, USBWA All-American team. She holds the record for rebounds in the women’s team at Stanford. The season has been particularly marked by her 27 double-doubles. She is averaging 26.4 points per game (3rd National) 60.4 % success in shoot (4th) and 12.1 rebounds (9th). She is the favorite for the meantime to be at her turn the first pick in the draft.

Chiney Ogwumike could be the second player in Stanford Cardinal, after her sister, to be the first choice of the WNBA Draft…