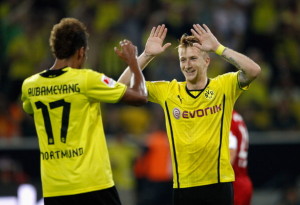 Eliminated in the Champions League by Real Madrid at the end of the quarterfinals, Bourussia Dortmund qualified for the final of the German Cup on Tuesday. Pierre Emerick Aubameyang and his teammates have imposed them on Wolfsburg during one of the posters of the German Cup semifinals 2-0.

Mikhitaryan opened the scoring and Lewandowski made the break and signed his 100th goal in the colors of BVB.

The men of Jurgen Klopp, who have already lost the league title and the Champions League can save their season by winning this trophy.

The other finalist will be known Wednesday night after the match between Bayern Munich and Kaiserslautern. The final will take place on May 17 in Berlin.