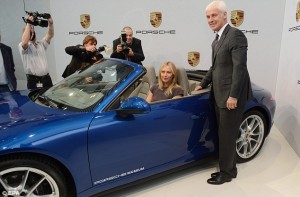 Maria Sharapova is firmly rooted in the red area of Stuttgart. The Russian dominated Sunday in a duel of former World No. 1 players, Ana Ivanovic of Serbia in three sets , 3/ 6, 6/ 4, 6/ 1.

“This title is very special because this time it was extremely difficult,” said the World No. 9.

Led 5-0 at the beginning of that final, Sharapova lost the first set after 47 minutes. She also lags behind in the second set after conceding her serve. But Ivanovic (12th in the WTA) does not confirm the break and suffered a sudden awakening of seeded No. 6, who concatenated 4 games to lead 5-3. Returned to 1 set everywhere, she runs in the last inning to validate her 13th straight victory on the German clay.

“The task was complicated but I always believed in my chances. This fighting spirit is perhaps part of my nature,” suggested the Russian superstar.

The fighting spirit that offered her a third successive trophy at Stuttgart.