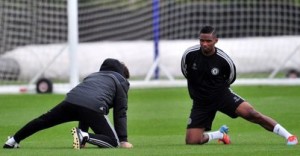 Absent against Atletico Madrid in the semi-finals first leg of the Champions League last week, and then against Liverpool on Sunday in Premier League, Samuel Eto’o may return Wednesday at Stamford Bridge against the Spanish club for the second leg clash.

The Cameroonian star striker was back in training on Tuesday with the Blues. The club also says on its website that other injured players these last days such as Eden Hazard, Petr Cech and John Terry also joined the training session.

José Mourinho will therefore have a choice tomorrow against Atletico Madrid (0-0 first leg).