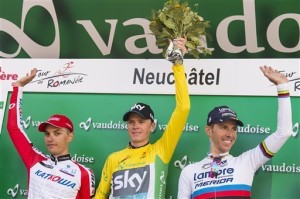 Dismounted from the Tour of Catalonia (March 24 to 30), Christopher Froome concludes his comeback with the yellow jersey of the Tour de Romandie for the second consecutive year by dominating the final against the clock in Neuchâtel.

The leader of the Sky who had a second ahead of Simon Spilak (Katusha) from the kickoff of this final stage, ran Sunday, took over with 29 seconds ahead on this course of 18.5 km. Rui Costa Completed the podium similar to that of 2013.

Kenyan Blanc, winner of the Tour of Oman, confirmed his return into form, two months ahead of the Tour de France (early July) whose defending champion he is, since he even won the day’s stage in blowing the victory of a second (24’50 “) on the triple world champion of the specialty Tony Martin (Omega Pharma-Quick Step).