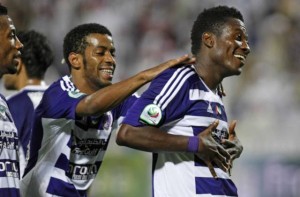 At 36 days ahead of the 2014 World Cup, Ghana may smile. Their star striker is hot like fire. Asamoah Gyan for 3 seasons in the UAE does not stop shaking nets. Tuesday, he scored his 8th goal in seven meetings in the Asian Champions League.

His side Al Ain club won 2-1 over Al Jazira in quarter-finals.

With 28 goals in the league, Gyan is still in the race to win a third Golden Shoe in the Gulf. He also reached the 100 goals in the Emirates last week with a brace against Al Jazeera.