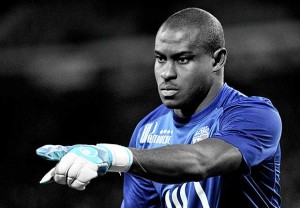 The winner of the Marc Vivien Foe  Award 2014 is known. It is none but Nigerian Vincent Enyeama! Created in 2009, this award recognizes the best African player of the season in Ligue 1 in France. Enyeama succeeds Gabonese Pierre-Emerick Aubameyang.

This is the first time a goalkeeper has won this trophy which previously bestowed to midfielders and strikers (Belhanda, Gervinho and Chamakh). That’s what comes to console the man that had a good season with Lille but misses the trophy of “best goalkeeper ” at the UNFP Trophies Sunday in favor of Italian Salvatore Sirigu of PSG.

Media RFI / France 24, the award organizers unveiled Monday the winner as well as details of the vote. Enyeama leads with 117 points ahead of Ivorian Serge Aurier (109 points), the only African that figures up in Ligue 1’s top XI. Cameroonian Henri Bedimo completed the podium with 93 points.