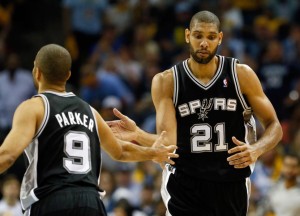 San Antonio ended the hopes of Portland by rolling the night in their series of conference semifinals. Carried by the trio Kawhi Leonard ( 22 points to 9 /15, 7 rebounds and 5 steals) , Danny Green ( 22 points on 9/13), Tim Duncan (16 points, 8 rebounds, the Suprs deprived of Tony Parker after 10 minutes, have imposed themselves 104-82 and won the series 4 games to 1.

Yet in the wake of Nicolas Batum (10 points, 12 rebounds and 5 assists) , the Blazers stand up to 8-1 in the first twelve minutes and stay up with Texans : 19 everywhere with 7 points and 3 rebounds winger Rip City over the period. The resistance of Terry Stotts’ men will crumble over time against the Texas mobility. Despite the 14 units by LaMarcus Aldridge (21 points, 10 rebounds), the franchise in Oregon is led by 7 points at the break, 44-51.

In the second period, the way got obstructed again for closes the leaders of Portland, in the wake of Damian Lillard (17 pts, 10 pds ) certainly altruistic, but struggling against the alternate TP, Patty Mills (18 points , 3 rebounds and 2 assists). The bench did not provide the second breath (8 points made by substitutes) and the gap was getting wider. Opposite the best coach of the season, Gregg Popovich, rotates and benchers participate in the third qualifying result for the final in the Western Conference with 40 points. Boris Diaw makes a copy of 5 points, 2 rebounds and 4 assists for the 104-82 victory that ended the series.

San Antonio will play the final Western Conference against Oklahoma City or Los Angeles Clippers who compete in the other semifinal series in the conference.