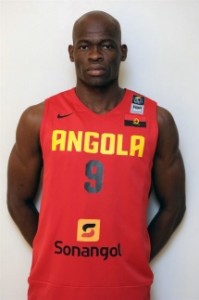 It is without Leonel Paulo that Petro Atletico de Luanda will complete the Angolan basketball championship. The Angolan pivot broke his right hand during the BAI (Angolan National League) Final Four match between his club and InterClube.

Out for the rest of the year, Leonel Paulo (28 years), however, did not draw a line on the FIBA World Cup, Spain 2014. Angolan International since 2007, the double African champion (2009 and 2013) hopes to recover in time to defend the colors of Angola. “If the coach, Paulo Macedo needs me, he told FIBA, he knows that I will never refuse to wear the colors of my country,” reports FIBA-Africa.

Author of three campaigns at Afrobasket, Leonel Paulo, valuable in the painting, was the epic World Cup 2010. Defending champion of Africa, Angola will play qualifiers tickets for the playoffs with other selections in Group D.