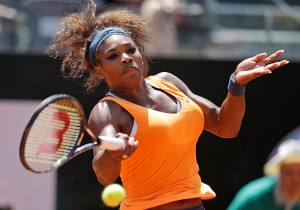 Serena Williams enforces her rank in the final of the WTA tournament in Rome. Opposed to the Italian Sara Errani, the World No. 1 has imposed herself over two sets 6/3, 6/0.

Supported by the Foro Italico public, Errani (No. 11 in the WTA), has resisted during the first set, conceded after 50 minutes of exchange, before undergoing the power of the American.

Serena Williams was imperative after 71 minutes, and retains the title she won last year. This is her third season coronation after those coronation of Brisbane and Miami, the 63rd of her career.