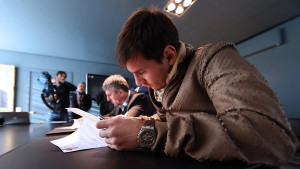 It was in the air for a few days. It is now done. Lionel Messi has signed his contract extension at Barcelona on Monday before joining Argentina to prepare for the World Cup. Having completed the season with an average of 28 goals, 11 assists, the Pulga is offered a juicy salary revaluation.

No details have been revealed but the newspaper El Pais always well informed indicating that Messi will receive € 20 million per year for a contract that expires in 2018. He becomes the highest paid player in the world ahead of Cristiano Ronaldo and his 18 million compensation.

The release clause if Messi is € 250 million. Suffice to say that he is on track to finish his career with the Catalans. Moreover, the quadruple Ballon d’Or again revealed his love for the club: “I am very happy to remain at home as I’ve always said. It is the business of FC Barcelona to decide what to do with my future, but my choice is to continue because I still feel the same affection from them. But if this were not so, I would look for a solution because I always wish the best for this club.”