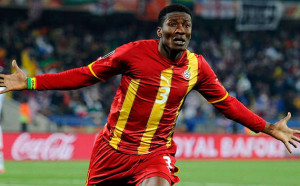 He probably deserved considering the performance he achieves with his club in the United Arab Emirates. Author of 26 goals over 29 league matches with Al-Ain, the captain of the Black Stars of Ghana, Asamoah Gyan, was voted player of the season in his country, during a ceremony held in Accra, the capital.

The serial scorer of the Emirates ranked first ahead of Kwadwo Asamaoh (champion of Italy with Juventus) and Sulley Muntari (who made a lackluster season with AC Milan).

A good motivation that will allow the former player of Sunderland star to shine a little more at the 2014 World Cup with his country.