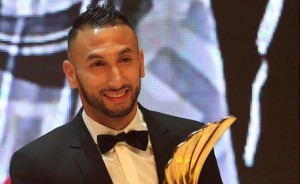 Absent since 2012 from the selection, Nadir Belhadj has achieved a good performance this season in Qatar. A performance that earned him the best player title in the championship ahead of former L1 stars namely Nene and Lisandro Lopez. The Algerian was named best player after Ivorian Baky Koné last year.

A performance that could send the former Fennec to Europe next season. Galatasaray and Besiktas, who inquired seriously, keep an eye on him. Belhadj could also commit to a gulf club as Al-Ain, Ahly Dubai (UAE) and Saudi club Al-Hilal are interested.

Sometimes placed as middle runner, the 31-year-old made an outstanding season with his club. He is among the top scorers and passers in the league and the Asian C1.