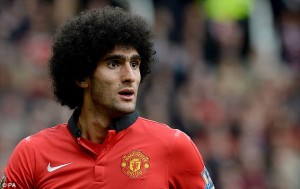 Having landed at Old Trafford this summer for € 32.5 million, Marouane Fellaini was not able to meet expectations. The Belgian International of Moroccan origin was author of a sawtooth season. The future of the midfielder at Manchester United seemed to darken.

And the arrival of Louis Van Gaal seems to compromise the future of Fellaini with the Red Devils. The new Dutch coach would not count on the services of the Red Devil for next season.

According to the British press, the Belgian could leave the Red Devils. Galatasaray would be inclined to recruit the player. The Turkish club, who rose in the knockout stages of the Champions League, would be ready to make an offer to enlist the former Everton player.