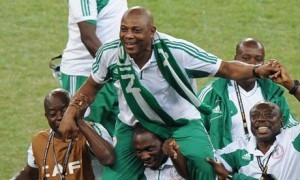 African champion with Nigeria in 2013, Stephen Keshi wants to compete in the final of the World Cup. But he and his crew will have to go beyond the first round group F consisting of Argentina, Bosnia and Iran.

“We can win. Those who win do not have two heads. Everything we need to go further, it is the concentration, avoid injury and take the games one after another,” he said.“The game against Argentina is not important at the moment. The most important games are against Iran and Bosnia. “